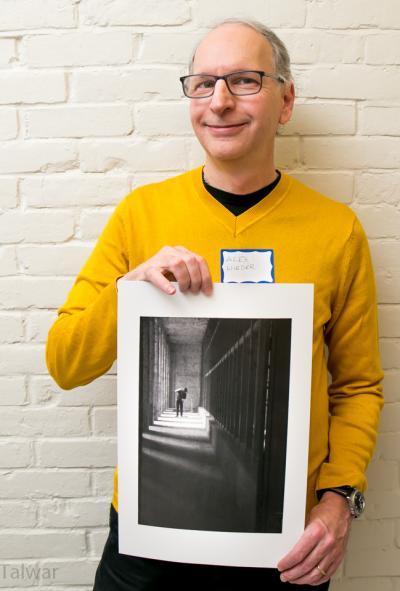 My life has been such a whirlwind the past couple of months, that when I ordered the printer I’d use to print my portfolio, I was positive that it was Wednesday, the package would be at my door by Friday, and I’d have five days to put everything together. Alas, I was wrong. It was Thursday, which meant that, hopefully, I’d get the printer on Monday (morning, afternoon, who knows?), so now the five-day plan to print was down to three or, maybe, just two days.

One of the best parts of this adventure was having had the fortune of meeting Roman, one of B and H printing specialists. He spent over an hour answer every possible question I could think of and then some that I didn’t even know to ask. My experiences at B and H are consistently pleasant, with the odd exception, but this one was really off the charts.

The printer, an Epson R3000, arrived on Monday afternoon and, to make things more interesting, this would be the first time ever that I’d print photographs. In a previous life, I was half-owner of a stationery store, where we did a lot of in-house printing, and I know better than most just how finicky and temperamental inkjet printers can get, so I wasn’t stressed. I was downright scared.

As if that weren’t enough, due to last-minute work commitments, it wasn’t until Tuesday night that I was able to finally open the box and, to my wife’s concern, set this behemoth of a printer on the dining room table (I’m writing this on saturday, which means I’m alive, which means I kept my promise to make it “disappear” before the weekend).

I printed a few proofs, which were utter crap, and I was so tired, that I kinda threw the towel at that point and went to bed thinking that if it didn’t work the next day, the day of the review, I’d just wait until next year and not punish myself further. There’s just so much self-flagellation one can take.

The next day I got out of bed at six and got to work (keep in mind that I’m not a morning person). By 4 pm I was done printing 19 photos with the best quality I could muster, about 30 one-page artist statements and maybe two dozen “contact sheets” to leave with the reviewers and at the location of the review, as one of the emails indicated to have leave-behinds for the reviewers I wouldn’t sit with, so I jumped in the shower, had breakfast, and left.

The original plan was to have a short list of carefully curated reviewers to show my photographs to. After all, there’s no point in presenting street photography to a reviewer whose gallery shows mostly abstract art. But that changed quickly, as I started hearing stories about people waiting in line for a full hour in order to have a specific person look at their portfolio. At 10 minutes per interview, an hour spent waiting means 6 missed reviews.

Instead, I decided to have as many reviews as I could. At this point in my career, I need reviews, of course, but I also need feedback, ideas, and direction, and this was my one shot to get them from this many of the right people and so early on.

I was one of the first to arrive, and after signing in, waited a few minutes outside the room. At the check-in table, there were some diagrams showing where each reviewer would sit at the tables arranged on the four sides of the “arena.” I wasn’t in the mood to even look at it. Nor did I have the energy needed to think about it. I grabbed one in order to have a list that included the reviewers I’d get to see if I need to refer back to it.

Once we were allowed in the room, a few people went straight to certain tables, as if on a mission. Others, dutifully, stood in line after the first ones, regardless of the fact that they’d be standing for no less than ten minutes for each person ahead of them. I grabbed the first available seat I found, mostly because it was right next to the photographer I had been chatting with while waiting, so we could continue our conversation. She showed me some of her work, which featured abstract renditions of beautiful models and I showed her some of mine, and we both waited with feigned patience for the review process to begin.

A little while later, the reviewers walked into the room and took their places, and then we waited a bit longer for someone to announce the official start of the event. Then, it finally started.

When my ten minutes were up, I looked for another table that would have no one waiting and went for it. While waiting for the reviewer to be done with her review, I frantically wrote down my own observations about my previous one, with as much detail as I could while trying to juggle my backpack, box of photos, room map, and my notebook and pen on very shaky hands. I didn’t have to wait long before I’d be facing my next reviewer. As I explained to her who I am and what kind of photography I do, I winced at the realization that I was repeating myself, but then reminded myself that this person never heard this schpiel, so I delved into it again as she flipped my photos. Then I repeated, as many times as I could…

Altogether, I had shown my oeuvre to eleven people: gallery owners and staff, collectors, photographers, and a college professor.

My work was very well-received, and I’m most grateful to the reviewers for their guidance and ideas. I was thirsty for advice, asked for it, and got a few excellent pointers. I walked out of the review with two new project ideas that were a direct result of these 10-minute, speed-dating-like conversations. The only disappointment, if any, came afterwards, when I thought of other questions that I should’ve asked to some of the reviewers. But, like I said, I cannot stress how positive (albeit stressful) this experience was for me. I left the place with that strange reassurance and validation that needs to come from strangers for it to really work.

Once the event was over (did two hours really just pass???), we all left the room. Reviewers were meeting at a nearby restaurant and, for a brief moment (very brief), I considered following them and having dinner at a corner table, and, who knows, be the fly on the wall. But I was just too tired and, truth be told, what I wanted the most was to go home and sleep. It was over. Finally.

When I reached the ground floor, I saw that there was a small coffee shop in the building. They were closing but I just needed a chair and a table to collect myself and my thoughts. Besides, I barely drink coffee. As I approached, a transvestite sitting at the only table said something to me and as I sat down, we started chatting. She (or he) was probably in her 50’s and homeless. She had moved in with a friend a few months ago, but the friend died recently and as her name wasn’t on the lease and during this time she never received mail at that address, she couldn’t stay in the place (otherwise she could’ve been covered by what is called squatters’ law) and at least stay warm for the winter. I also learned that homeless shelters will take in women and men before taking transvestites, which tend to be left out because of lack of space at that point. Since this was the Gay Center, she also assumed that I’m gay, and asked me about my being there. I explained that I’m not. He also asked me if my wife knew I was at the Gay Center, and was still skeptical about how she’d take my presence there.

Some 20 minutes later, after hearing all sorts of fascinating tales from the golden transvestite era of the 80’s, I bid Jeannie (not sure if that’s what she said her name was) farewell and as I began to get up, she asked me to wait. She came back a few minutes later with a bouquet of flowers and thanked me for my kindness. She explained that she’d been selling them on the street, as she pulled from it anything that looked withered. She asked me again about my wife and warned me not to tell her where I got the flowers. I reassured her that she’d be fine with it and, since I hardly ever buy her flowers, even though she loves them, she’d be delighted (and she was!).

In a zombie-like haze, I went home.