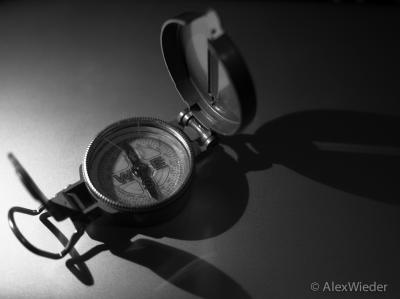 Trying to figure out what kind of photographer I am, while [also trying] to get work done and preparing for a photo-critique whose sole requirement is to bring three (yes, three!) photographs was like the perfect storm to turn these past few weeks into the weeks from hell (did I mention that I also have a family?).

The good news is that, after countless hours looking at pictures, I managed to pick four. The bad news is also that I picked four. And as I write this I’m frantically going over them in my mind to figure out which one to drop from the selection. All this, while riding the train to the presentation, not to mention that I’m writing as a way to distract myself from it all. Ah, the joys of ADD…

A few weeks ago I was told that, professionally, it’s more than advisable to focus on one or, at the very most, two genres of photography. Something I instinctively knew, but lacked the right label or labels, for it. This is another thing that occupied my thoughts with a vengeance, lately. Did I mention that I also have a family?

The science of classification is called Taxonomy. Taxonomists are people obsessed with neatly placing things and concepts in little (also neat) compartments. Animals were the first to be subjected to this process – at least according to the old testament, which actually makes Taxonomy the oldest profession. (The profession you’re thinking of is probably the second-oldest, but it’s still one of the better known ones.) Not to stray (ADD, remember?), my first thought was to follow a taxonomic approach because, after all, “photographic genres” is just a glamorous way to refer to a mere classification. Unfortunately, that didn’t work for me: I had nowhere to start other than knowing that I’m an opportunistic photographer.

I looked at everything, from photographs to painting, to sculpture, to the ceiling (a lot, actually), I spent a few hours “parasitizing” a bookstore, browsing photography books. It was, truly, a delicious exercise, because I got to do what I like the most – wander around in a sea of knowledge with no apparent goal in mind as it relates to each separate task – but at the same time, it was truly excruciating, because I did have a very specific goal in mind: to figure out my own photographic style out. And it wasn’t going well, at all.

Lore has it that when Michelangelo was asked how he sculpted a horse, he said that he started with a block of marble and would chip away anything that didn’t look like a horse. I say “lore” because I was unable to find an authoritative reference to this anywhere. The closest I found to this comes from two quotes: “The best of artists has no conception that the marble alone does not contain within itself,” and “Carving is easy, you just go down to the skin and stop.” Other than this, I couldn’t find anything even remotely close to the horse story (or whatever animal is mentioned in that anecdote) – if it’s not on google, it doesn’t exist; if it’s not on wikipedia, it’s not important; and if it’s not on youtube, it never happened (remember also to credit me, because this is something I came up with).

Michaelangelo’s or not, the idea seemed to be the only approach to finding myself in this maze of photographic genres, and so, the answer came, of all places, from a PowerPoint slide in a recent lecture by David Brommer on Photographic Style: 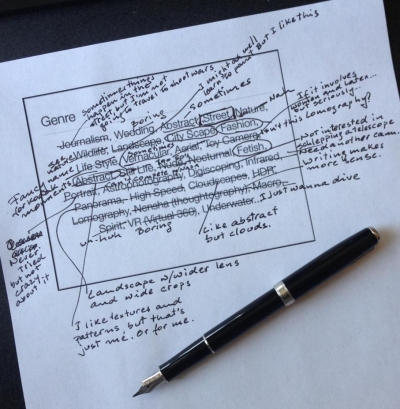 Now that it’s done, it seems trivial, but crossing words out of this not-too-long and at the same time incredibly-inclusive list took half a day of uninterrupted introspection and contemplation of the self.

Having devoted practically all of my waking hours to this, while at the same time, looking at thousands of my own photographs, helped tremendously to answer the questions I was now asking myself as I stared at the list. If you think that being honest with others is often difficult, try to exercise complete, brutal honesty with yourself. It becomes obvious why we’re seldom entirely honest with ourselves: we’re far more brutal than with others, and worst of all, as it all goes on in our minds, we don’t even need to reach for words. Not easy and, especially, not pleasant.

I went through the seemingly innocuous words on the list, one by one, deliberately, thinking about each genre, pondering it, and throwing it at an imaginary wall plastered with every picture I can remember ever shooting to see what would stick.

I’m still an opportunistic photographer. That stuck. Immediately. I have accepted it and embraced it, but that’s not a genre; that’s more of a personality quirk or a working style, if you will. That is OK and, more importantly, I’m OK with it. Knowing your quirks means that you have an excellent starting point to figuring how to work with them. Natan Dvir, a photographer whose work I admire immensely, said (I’m loosely quoting here) that “some project ideas you come up with, while others come to you.” An opportunistic streak can only be an asset in recognizing new projects when the signs start to show up.

In the end I was left with a much shorter (albeit just as difficult) list of genres, and this is where all the grueling work of the past weeks paid off. Over the past 6 years I’ve taken pictures that are all over the taxonomic map of photography: portraits, landscapes, architecture, abstract, action, events, people, fetish, street, clouds, macro… (I’m working from memory here!). In all these categories I’ve been able to take good pictures, but to be brutally honest, being able to nail beautiful landscapes on the few occasions that I went for that doesn’t make me a landscape photographer. It’s the result of being a good photographer, and that’s it. I enjoyed shooting them because I enjoy photographing, but, frankly, I’m not going to pack my gear and go to bed at 8pm so I can be on the road to Ironworks Pond by 5am (unless I want to make sure that my cousin Erick gets some amazing foliage shots, which was my excuse when I did it). So I mercilessly crossed out the genres that weren’t really prominent in my body of work.

In the end, the list was reduced to street and people. Those are the genres I enjoy the most and the reason why I may sometimes leave the house in the morning without my MetroCard, but never without my camera. Of all the pictures I can remember in the time it’ll take me to finish this sentence, the ones I recall more vividly, and the ones I like the best and enjoyed shooting the most, are those that fall into these two genres. And now, after a few long and very agonizing weeks, I can finally go to bed in peace, but not before sharing the three photographs that got this all started: