Dumb Questions – What Camera Do You Use? 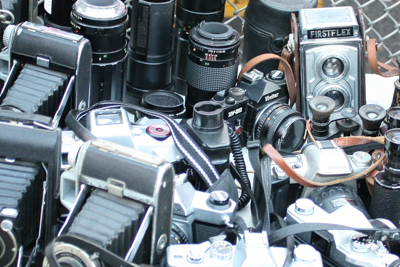 The title of this series of articles is quite deliberate, however, I must clarify that I believe that the only dumb questions are the ones that people don’t ask. The dumbest thing that you can ever do with a question is not to ask it. I ask lots of questions whenever I can. Given the chance, I will ask any question that comes to mind, and so should you.
Even the dumbest-sounding question could mark the beginning of the most fascinating conversation, so I urge you to ask whatever you need to ask. It’s always better to come out of a meeting or a class looking like an informed idiot than answerless. Or, to put it bluntly, and this is not mine, “It’s better to have stupid questions than stupid people who don’t ask questions.”

And since this article’s about photography, the most often asked question is “What camera do you use?”

Many accomplished photographers frown at this question. Some do it for legitimate reasons, some due to snobbery, but many do, nonetheless. If you’re somewhat new to photography, however, it is a legitimate, and, most importantly, relevant question for you. The last thing anyone wants to do when facing the possibility of plunging some serious cash into an activity is make sure that it’s not going to end up as a costly mistake, and since experience is the result of having moved on successfully beyond a slew of mishaps or mistakes, or both, it’s only natural for us to seek guidance and advice from more experienced people, even if this advice is the result of reading between others’ lines and emulating their habits and decisions. We’ve all been there. We’ve all have had to decide which, of a large number of choices, will be our first or our next camera.

The truth is that the camera you use for your photography is as important as the brand of shoes a hooker uses to look attractive enough to do business (well, yeah, a foot fetishist might find this relevant, but you get the idea). And to a certain degree, the camera is, indeed, immaterial, but if you’re reading this as you’re trying to decide what equipment to get, I can’t expect you to understand this, and I don’t. Just keep it in the back of your mind for now and don’t worry too much about it; I will get back to this later.

Henry Cartier-Bresson used a Leica. I don’t know if that was always the case, as you don’t just go out and drop a few thousand bucks on a first camera, but it’s quite possible that at the time some things weren’t as obscenely expensive as they are now. Then, there’s always the possibility that he went this way because someone he admired used that particular camera, and that’s what many people do. If that was the case, there’s a possibility that he did exactly what I just mentioned: to emulate someone he admired and/or respected, but I’m just speculating here. According to an article by Ken Rockwell, “In the 1930s, Contax was the good camera, and most serious impromptu photojournalists … had to settle for Leica instead.”

Many photographers strive to own a Leica just because he did (emulating our heroes is intrinsic to our humanity and you’d be hard-pressed to find someone who hasn’t done this at one point or another). Also, in some industries, the camera you use has weight on how you are perceived as a photographer (a wedding photographer would have to be very well-known and reputable to be able to show up at an event with a point-and-shoot camera and not have his clients wonder about what they got into, for example).

Having said that, though, please don’t take me wrong; Leicas and Hasselblads, to name a few well-known and sought-after brands, are excellent cameras. There’s no doubt about that, but that doesn’t mean that they have a monopoly on quality. And for sure their price-tags don’t include additional talent or better observation skills. A better camera will have an impact on the quality of your photography, but only if that same quality was negatively impacted by your previous one. If that were the case, photography as an art would be limited to those able to afford higher-end equipment.

Unless your purpose is to take crappy photos (and there is an entire photographic movement devoted to that – it’s called Lomography), any camera with decent specs will do, and this includes most of the smartphones out there nowadays; there are excellent photographers who don’t use anything else (I know several such people, which proves that photography is more about the ability to see and observe than anything else).

If you asked this question, chances are that you’re starting out, and, I repeat, there’s nothing wrong with it, but you must know that online, most pictures look great. In case you didn’t know (or didn’t think about it until now), in order to fill the average computer screen you need less than a megapixel (a 1,024 x 768 pixels photo is roughly 0.75 Megapixels). If your camera has a decent lens (and most do) and you learn to use it well, your images will be as sharp as Jay Maisel’s (again, as long as you have a good lens too).

Would you want a 1 MP camera? I doubt it. I also doubt that in this day and age you can get one unless you go to ebay or a toy store, but even if you do, I’ve seen many excellent pictures taken with a children’s wrist-camera. Take a look at Michael Zhang’s article about photographer Gary Tyson. Or this one, in which photographer Michael Sweet writes about why he is in love with low quality cameras.

As I write this, you’d probably need to look under a rock to find a camera whose sensor has less than 12 Megapixels, and that’s more than adequate – I have and use a 12 MP Canon S110 when I don’t feel like schlepping around my Olympus, which, in turn, is only 16 MP. Want more Megapixels? Go for it. There’s no law against it. The only limits are pocket depth and objecting spouses.

For that first camera (or that first “serious” upgrade), read reviews, set a budget, and get the best camera you can afford. If you’re technically inclined, make sure you can get one that allows for manual control of aperture and velocity, if you’re interested in a point-and-shoot. Even if you aren’t prone to use those features at first, there’s a good chance you will want to at some point. But even if you don’t, that’s OK too. I know photographers who keep their cameras on automatic settings, and their photographs are gallery material just the same. In the end, almost nobody cares about the technical aspects behind an award-winning photograph. Manufacturers tend to mention them in their “photographer of the day” or other similar web galleries because they’re in the business of selling, and educating their audience is in their best interest.

If you have enough money for an SLR (also known, pointlessly, as DSLR or “Digital Single Lens Reflex) or a mirrorless camera go for one (it’ll have those features). Like skis, when you buy a camera, you should buy it not according to your current skill level, but according to the skill level you want to reach, so get the best camera/lens combination that fits your budget or consider getting second-hand or refurbished equipment, which is an excellent option as well (I’ve saved about $500 by doing this, and that’s a lot of sushi).

In the interchangeable-lens segment, however, there is one caveat: lenses. Your first lens is likely to be a zoom. While the images produced with your new camera will certainly beat lower-end models, the “kit” lens, as it’s called in the industry, tends to be a lower-quality lens. If you can afford to get a better lens from the very start, you should. Otherwise, be prepared to sell the kit lens (at a loss, possibly) within a year. Trust me on this.

One feature that now comes at a premium in the point-and-shoot models is a viewfinder, which comes very handy when the ambient light makes it hard to look at a screen. My point-and-shoot doesn’t have it and when I miss it, I miss it a lot. A viewfinder will likely increase the price of the camera. As people have become accustomed to shooting with their phones, they naturally tend to look for the same experience in a camera, so manufacturers opted for dropping it from most of their offerings, hence, making them more affordable. Most of the people who do use the viewfinder are more serious than average about photography. As a result, a viewfinder is also a sign of a better than average camera.

So, what camera do I use? I use a Canon S-110, an iPhone 4s, and an Olympus OM-D EM-1. Before that, I was very happy with a Canon S-90, and a Nikon D90. And before that, a Canon xsi . The photograph on my upcoming group show at Soho Photo Gallery, in New York, comes from the latter.

Get a camera that’s comfortable enough for you to use as much as possible.