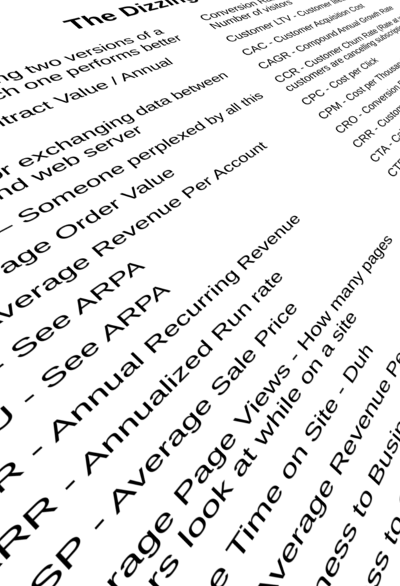 It seems impossible, these days, to go anywhere online and not end-up reading about Search Engine Optimization. SEO and Digital Marketing are en-route to become the poster children of this decade’s neo-industrialism.

What irks me about this brand-new industry, however, is that those involved are starting to sound, and to some degree, behave like cars salespeople.

On twitter, which is where I’m most publicly visible, all you need to do is tweet anything with the #SEO hashtag and in a matter of hours at least five experts will follow you. This is flattering, of course, and if you’re a normal, courteous user of the social network, you’ll reciprocate. A few days later, if you’re paying attention (or use a service that notifies you of this), you’ll notice at least four of the five unfollowing you (this is how they keep their followers:following ratio so high and appear far more important than they really are). Then some others will do the same thing because they are watching one-another and they notice when someone starts following one of their competitors. After that, hardly a week will go by without any new SEO experts pretending to be fans of yours: I can’t imagine more than two or three of the two dozen such experts that follow me on twitter as true photography enthusiasts, but as long as they follow me, I’ll reciprocate it out of common courtesy.

I’m awed by the creation of an entire industry that pivots, from what I’m seeing, solely on selling customers on the idea that what the experts do is so damn complicated that no one else is capable of doing it. When marketers put their money and effort into marketing marketing itself, the best commercial campaigns are likely to pale by comparison. And I won’t dispute the virtues of marketing – there’s nothing to argue there: it’s a science with a proven track-record that goes as far back as as nazi Germany, and possibly even before, and it only keeps getting better and better. (Or worse and worse, depending on your personal views on consumerism.)

What started as just SEO (Search Engine Optimization) has spawned a plethora of child industries, with expertise ranging from the broad (Social Media) to very narrowly focused on single outlets (twitter, facebook, etc.). 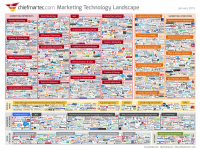 What they all have in common are advanced-looking graphics (and infographics) the likes of which we’ve never seen before, complicated statistics, and, above all, a number of new acronyms and terms that probably have the engineers at Microsoft scratching their heads, as they used to be the leaders at coming up with new names (and acronyms) for old things. In just a few days, glossing over some 60 articles about this new science, I was able to collect just as many TLA’s (three-letter acronym). It’s like a new language, and, since I’m writing about it, I figured I might as well come with one of my own for the title of this article. (In true expert fashion, I’ll try to beat some sense out of it later.)

The proliferation of acronyms in itself is just a way to make something that’s not rocket science seem much more complicated than it already is. 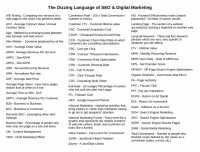 To the point that some universities have started to offer entire programs in this field – the fact that new degrees have been created, and how quickly, is a testament to how good marketing efforts have been and are in this area. (This, in spite of having read a few articles from SEO and Online Marketing authors stating that whatever you need to learn, you need to learn it by doing and reading online because the industry is in a constant state of flux.)

What’s interesting about going over so many articles in so little time is that in spite of the flashy headlines most of what SEO, Online Marketing, Social Media experts claim as their own, unique, ideas are more or less repeated across the board.

To add to the misery generated by such induced state of perplexity, there are a gazillion experts out there, all claiming to be “the one’s.”

The bottom lines are, in SEO’s case, to have your web site appear prominently on google searches (yes, I know there’s bing too, but we all know how far behind second place is in this competition) and, in Social Marketing’s case, to have a mass of followers the size of a small city.

SEO and Social Marketing are extremely time-consuming jobs. There’s good reason for companies with deep enough pockets to hire small teams whose sole mission is to create content and further their employers’ presence in social media outlets. SEO and Social Marketing companies have tools to make this easier and also affordable for the rest of us, yet, in spite of how tedious it is to reach a respectable level of online relevance, it’s not as terribly complicated, as they constantly claim it is (fear is one of a few key motivators in marketing).

For social marketing purposes, it all boils down to being where your audience is, and constantly reminding them of your existence. In and out of the internet, people have very short memories. It is a known fact, in direct mailing (the paper kind) and advertising, that it takes at least seven impressions for people to remember your brand. The worst commercial or ad in the world can easily beat a much better but less frequent one simply through the power of repetition. Since social media is a subscription-based model, the goals are to gain as many followers as possible and once that’s taken care of, to figure out a way to make a large enough number of them to buy whatever it is you’re selling or to consume your content as avidly as possible (oh, by the way, they call this “conversions”). This is how you or your company becomes a strong brand. The one advantage of social media, if there’s a budget available for it, is that advertising can be targeted, as Dr. Evil would say, with “freaking LASERs:” Around June of 2014, as part of a hilarious but rather sinister prank, Brian Swichkow, created a Facebook campaign so narrowly targetted, that only his roommate saw the ads he placed.

Then there’s SEO proper, which is a totally different, yet related, beast. The goal here is for your brand to appear prominently on search engine results pages (SERPs, for those “in the know”), which is a fancy way of saying “show up on at the beginning of the first results set returned by google for a given search.” This is one of those problems that can be partially solved by throwing money at it. If you have money to spend on uncertain results, all you need to do is figure out is what searches you want to adorn with your ads. To do this, all you need to do is figure out which keywords people use when looking for people or companies like yours, decide how many times to show your ad, and then bid. Granted, this is an over-simplification of the process (expect to spend no less than 4 hours just to understand what ad-words are and how to buy ads on google if you know nothing about it).

SEO experts (at least those I’d call experts) obsess about the algorithm used by google to rank search results. Whenever you run a search, the first result that is NOT an ad is the one google considers to be the most relevant, based on the keywords you searched for. It’s not necessarily the most relevant, but as long as google’s computers think it is, most people will do too. Google, of course, doesn’t reveal how they figure that one web site contains information more relevant than any other (when their algorithm changes, they publicize that, but that’s as far as they’ll go). This is to prevent “creative” people from gaming the system and gain an unfair advantage. At most, SEO experts can do their best to reverse-engineer google’s behavior to their and their clients’ advantage, unfair or not. Then they sell their expertise as the vaccine against certain Search Engine Doom.

What they will never tell the world is that google is not in a race with them. Google’s programmers are focused, instead, on making their algorithm as useful as possible to USERS. As such, they build as much “intelligence” as possible into it (i.e. a web page that consists simply of the word “photography” repeated 593 times will not rank high at all – in fact, it might even be banished from search results due to keyword spamming). Google’s algorithm is continuously fine-tuned to make it choose its results as closely as possible to how a person would. With this in mind, you need to have only a handful of things in mind:

Your content needs to be as valuable as possible to your target audience. It also needs to stay as uniform as possible. It’s OK to stray (I’m doing it with this article, which has nothing to do with photography per se), but if you have a blog about literature, stick to that.

Once you know what keywords you want your web site to appear prominently for on search results, make sure that you include them in all your posts, but do so in a way that their relevance and presence is obvious or their “unnecessariness” will become obvious to both, human and non-human visitors (google). It’s very beneficial to have your main landing page (the one that comes up when visitors just type your domain name on a browser – i.e. Alexwieder.com) include those keywords.

There’s agreement among SEO experts in the importance google gives to the number of web sites that have links pointing to yours. I don’t think that’s going to change, as that is a very clear indication of a web site’s relevance in the online community.

And no, I couldn’t come up with a good, technical and elaborate explanation for S.E.M.E.N., but it does have a good, click-bait-y ring to it, doesn’t it? Maybe some other time…