Dumb Questions Part II – Size matters (or how many megapixels?) 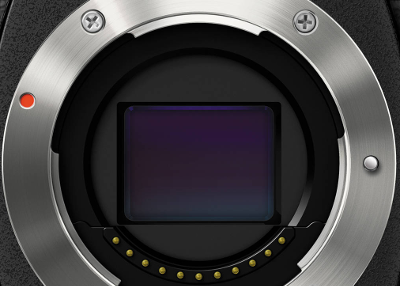 I’ll start by saying (again) that there are no dumb questions (see the first article of the series for more on this).

Your camera’s sensor is the equivalent of the film you’d use in an analog camera (or any camera made before 1990 in all certainty). The quality of the sensor (and that of the lens – more on that soon) directly impacts the quality of your photos.

Pixel count is the first specification people tend to look at, overlooking another that’s far more important: sensor size. In the case of sensors, like the title says, size does matter.

The smaller the sensor, the closer together (and smaller) the pixels will be.

Vicinity is important because, to a certain degree, each pixel is affected and affects neighbor pixels.

But most importantly, pixel size matters because a smaller sensor element (fancy name for pixel) needs more intense light than a larger one to get excited (fancy name for react and generate an electrical signal). What this means, in plain English, is that cameras with smaller sensors do worse than cameras with large sensors in low-light conditions, resulting in noisier images.

Does this mean that they do badly? No. Sensors nowadays are extraordinary feats of technology and it’s not uncommon for a sensor that would fit on your pinky’s nail to pack 15 MegaPixels and yield excellent images. Nevertheless, you will get absolutely better image quality taking a photograph with a camera equipped with a full-frame (24 x 36 mm) sensor than if you take the same photograph with a point-and-shoot equipped with a much smaller sensor with the same pixel count as the former.

The main reason to be interested in gobbles and gobbles of MegaPixels is cropping and printing. If you normally crop your images and want to get decent pictures, you might want to get a resolution as high as possible. Yet, I have a rather large print in my living room and it came from a puny 12MP Canon S110. It’s about 57” x 42” and it looks damn good! – remember that at those sizes, you don’t look at the image from 10” away but from, at least, 5 or 6 feet. This camera’s sensor, which is larger than most point-and-shoots’ (and it’s OLD) measures 7.6mm x 5.7mm (about 1/3” across by about 1/4” tall). A full-frame camera’s sensor is 36mm x 24mm (about 1.5” x 1”).

I wouldn’t consider a camera with a sensor smaller my S110’s, unless I’m going after a particular “look.” Cell phones are a different story: you don’t buy them for the camera. The camera is just an additional feature that you get with the device. It’s just something I have on me at all times and, on occasion, it does come handy, but, so far, I haven’t gone out thinking “I’m going to do an entire project with the phone.” Yet.

The main consideration for sensor size is noise. In digital photographs, noise shows up as a grainy texture, especially apparent in dark areas of the image. The smaller a sensor element, the less light it is exposed to, and that means that if there’s not enough luminous energy to excite it, so its state will be dark, but randomly so. Smaller sensors are more prone to this phenomenon than their larger counterparts.

These two images illustrate both points quite well. I shot both of them with the same exposure settings at ISO 1600.

First let’s look at the noise on both of them. The dark areas on the left photograph show considerably more of it. At low ISO, the difference isn’t as noticeable, but when you start pushing the sensibility (higher ISO), noise becomes noticeable and ultimately, actually interfere with the image. 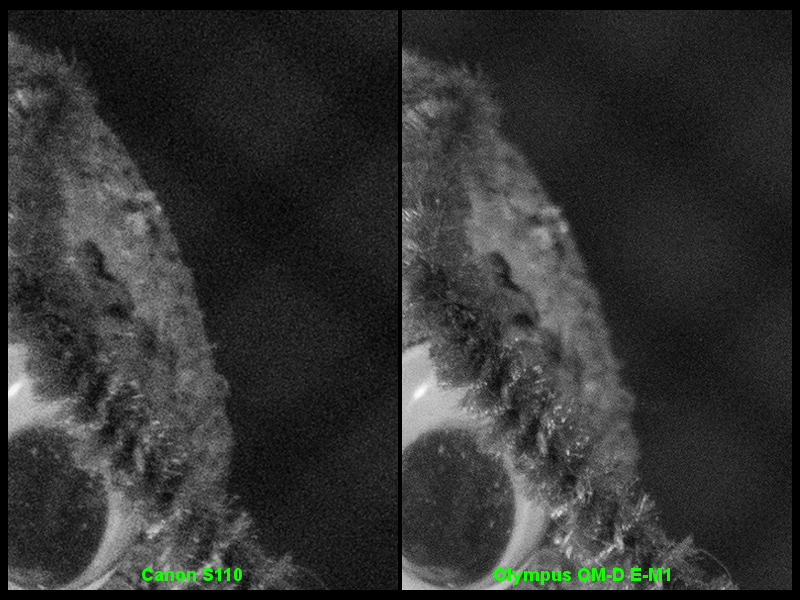 Then take a look at the crosshatch behind the subject: the Canon, which has a much smaller sensor, shows it less blurry than the Olympus. This is because the former has a smaller sensor and as a result, much more depth of field at any given aperture setting.

One clear advantage of cameras with smaller sensors is that lenses for them are smaller (and, consequently, much lighter!): a normal lens, which has a viewing angle similar to the human eye, for a 4/3 (“four thirds” to the initiated) sensor will have a focal length of 25mm. For a full-frame camera, you would need a 50mm lens in order to achieve the same result. If you’re not comfortable schlepping your camera around because it’s bulkier and heavier than you’d like, this is one thing that will affect your photography: cameras don’t take pictures while sitting in a closet.

So, how many megapixels already!?

For screen viewing, it’s not that relevant, unless you want to zoom into tiny details in the image like they do in spy movies or most current police series. If you do print your photographs, however, the number depends on the target size and how much of your images you tend to crop. When I was starting out I tended to crop a lot in order to recompose photographs that were otherwise uninteresting, yet, 12 – 14MP was plenty for me. Depending on the final product you have in mind, you can calculate how many Megapixels you’ll need using the following formula:

For example, if you plan on printing 40” x 30” posters at 150 dpi (dots per inch), you need a camera with a 27 Megapixels sensor (150 x 150 x 30 x 40). You can also get away with a 12 MP camera and scale the image up to the desired dimensions (that’s what I did); it all depends on how your prints will be viewed. But don’t go strictly by the numbers; the only way to really have an idea of what works and what doesn’t in this respect is to actually print your images and hold them in your hand or hang them on the wall. Many will balk at this, now that printer output’s in the 1200 dpi range, but, from a reasonable distance, even 75 dpi looks good. Like I said, it’s a matter of actually trying things out.

What’s truly impressive about sensors and Megapixels is that we’re talking about microscopic structures. The image below, has a bunch of dots. They don’t look like much, but if you count them, there’s about a thousand of them. If each dot represented a pixel, 1 Megapixel would be a thousand times what’s in the image. That’s a lot of dots, and that’s only 1 MP. And then, if you were able to picture that, imagine all those dots crammed on your fingernail. 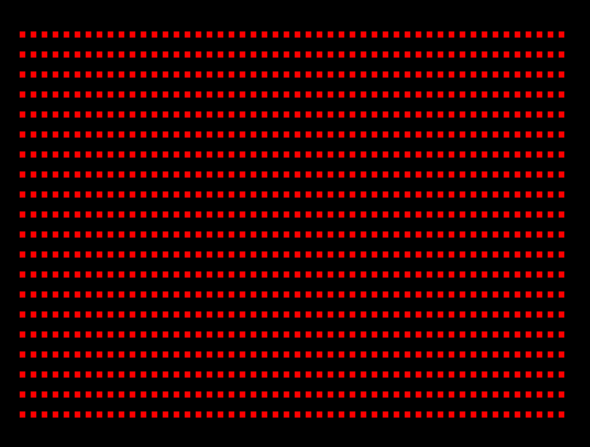 If that still doesn’t impress you, consider that each pixel is comprised, actually of four sensors (2 for green light, 1 for blue, and 1 for red). In essence, it’s a miracle that a sensor that’s smaller than a 10 cents coin, with 60 million sensing elements on it works at all! One thing is to coat the surface of a film with a chemical emulsion, another is to create a device that has so many components that actually works. And I realize that it’s normal in this day and age to have similar devices all around us, but their ubiquitousness doesn’t make it any less miraculous.